Extreme, perhaps, in size—6’10” when fully extended (see the linked video below)—and certainly in price ($260,000/pair US price), the Estelon Extreme loudspeaker has arrived at its exclusive US dealer, Audio High in Mountain View and Los Angeles, CA. The brainchild of Estonian designer Alfred Vassilkov, 56, who describes it as the culmination of 30 years of research, each loudspeaker, pictured above with Audio High’s Michael Silver, weighs 551.16 lbs (250kg), and measures 31.1″ (790mm) wide by 32.28″ (820mm) deep.

The speaker’s frequency range is claimed to be 20Hz—45kHz, power rating 500W, nominal impedance 4 ohms, and sensitivity 91dB/2.83V/m. Designed for large rooms, its remote-controlled height adjustability, which ranges from 70″ (1770mm) to 82″ (2083mm), is complemented by a manually adjustable 1.5″ diamond inverted-dome tweeter that has three positions. Other drivers, all custom-sourced from Accuton in Germany, include two 10″ aluminum-cone woofers, housed in their own compartment; one 10″ aluminum-cone mid-woofer; and one 7″ ceramic inverted-dome midrange. All wiring is Kubala-Sosna, and the body of the speaker is extremely inert crushed marble. Even the footers are special: Stillpoints black powder-coated Ultra 5s, which cost $6000 total all by themselves, come standard.

Size is one thing; performance is another. To get the real skinny on a speaker that is anything but slim, I joined Bay Area Audiophile Society member Jeremiah Horn for a three-hour private demo in Mountain View, hosted by Audio High’s Michael Silver and Eugene Konnikov. A few days later came a Skype interview with designer Alfred and his daughter, Chief of Marketing Alissa Vassilkova.

Although the speakers can be bi-wired and bi-amped, I auditioned them in swing-one-way configuration. Heard with Chord’s SPM 14000 monoblocks and CPA 8000 preamp, a Meridian 818.5 media server, and a PS Audio P10 power plant, all arrayed on Grand Prix Monaco racks, the system was wired with Kubala-Sosna Elation cabling. In order to maintain equilibrium, I did not ask the system’s total price.

Instead, I listened long, but not hard. That’s because, from the very first piece of music, a Red Book file of violinist Isabelle Faust and pianist Alexander Melnikov playing Beethoven sonatas, the detail and clarity of the presentation were astounding. During one passage, I felt I could not only hear every dynamic shift and change of tonal coloration, but also feel the intention and inspiration that governed Faust’s playing and defined her as a major artist.

A recording of Melnikov playing Scriabin’s colorful Piano Sonata No.2 further led me to believe that the speaker was effortlessly transmitting everything that the audio engineers were able to capture, including undertones, overtones, and the smallest dynamic shifts. But that, of course, was on relatively “simple” music. Turning to Iván Fischer’s Budapest Festival Orchestra recording of Mahler Symphony No.2, auditioned in 16/44.1 file format rather than the native-DSD resolution I hear on my dCS gear at home, I was impressed with how clearly the speaker delivered the different pitches and timbres of a full Mahler orchestra. Equally impressive was the superb definition of the bass drum, and the manner in which the strongest thwaps never detracted from the clarity of the instruments around them. 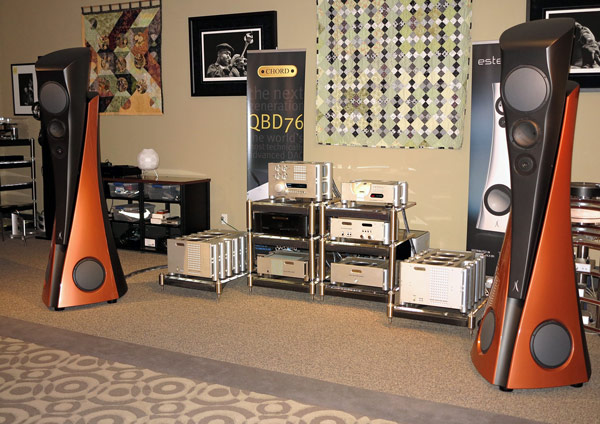 Audio High’s very large, beautifully appointed main listening room is saddled with several sonic challenges, not the least of which is acoustic paneling on the ceiling and a huge airspace above that. Repositioning myself 10″ closer and 2″ to the left, I discovered the sound far richer. Listening to Melody Gardot, recorded in redbook quality, I was gripped by her absolute focus and attention to every sound she was making. If the art of Rachelle Ferrell was equally impressive, Pink Floyd’s classic “Wish you Were Here” from 1975 blew me away with its very forward sound, size, and sheer visceral impact.

At this point, Jeremiah could no longer contain himself. “I’m not used to hearing so much detail,” he said. After the Peabody-trained bass player requested Led Zeppelin’s “Your Time is Gonna Come,” the really huge, coherent soundstage defined by the band’s organ, and the clarity of the cymbals impelled him to exclaim, “I never heard it like that before!”

Sensing the way to floor us, Eugene then summoned forth Deutsche Grammophon’s first stereo recording, of organist Helmut Walcha playing Bach’s Toccata and Fugue in D minor. “The bass control is pretty damn sensational,” I wrote of a speaker whose bass solidity reminded me of what I heard from the mighty Wilson Audio Alexandria XLF, paired with the dCS Vivaldi stack, VTL Siegfried II amplification and Transparent cabling in a very different and even larger environment. Kudos and mental health treatment to anyone who would attempt to arrange a back-to back demo of those two loudspeakers in identical acoustic environments with identical components. That’s the only way you could actually begin to compare them, given that positioning them side by side would impact both speakers’ performance, and not necessarily equally, and attempting to rapidly move them back and forth into position is as inconceivable as it is untenable.

Finally, we moved to the higher resolution of 24/96. Yes, we’ve all heard Ella & Louis’ “April in Paris” 1000 times over, but rarely, I would contend, with so much realistic yet natural sounding detail. 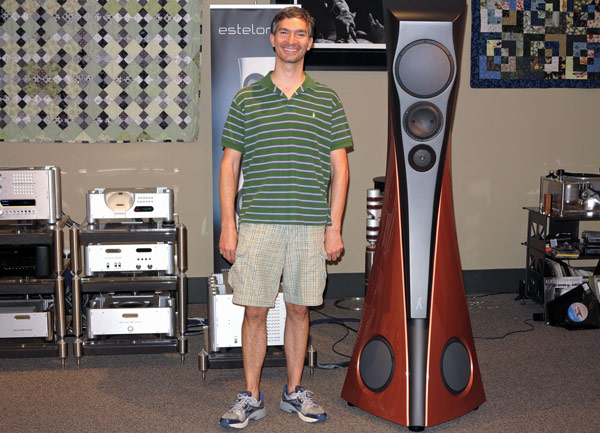 In my discussion with father and daughter Vassilkov, Alfred explained that “both woofers are absolutely symmetrically loaded, both inside and outside the lower module,” and separated from the midrange and tweeter in order to protect those other drivers from bass vibrations. It wasn’t even necessary for him to say, “This makes the bass more accurate and controlled,” because I was already convinced of same.

“The idea was to create a loudspeaker that would be easy to use in different large rooms, because the end customer could adjust the speaker to his room,” said Alyssa. “Speakers play differently in different rooms, and they need to be adjustable. You also need to find points in your room where you have fewer reflections. You can try the five different heights and find where the sound is most natural and true. The shape is meant to create ideal conditions for the drivers. There are no parallel walls and no distortions, which helps achieve natural sounds without colorations. And all the components were chosen after long periods of tests.”

Thus I learned that the Extreme’s Teflon hybrid capacitors are specially manufactured in the US to Estelon’s specifications. What, I asked, not by Mundorf or Dueland? “We wanted to use the best we could find,” replied Alyssa. “We tested so many of them, and became convinced that these are the best on the market.”

The bottom line, said Alfred (with the help of Alyssa’s translation), is harmony. “All the details, everything has to be like one. I want to achieve a sound as natural as possible. Neutral and natural are the key words.”

To ensure the manner in which the Estelon Extreme is presented, Alyssa and Alfred have chosen Audio High as their sole US dealer. “We want to be able to trust the people who market them,” they said. “It is an exclusive speaker, with an exclusive way of demonstration.”

Exclusive it is. Rarely have I left a demo so aware that, if I hadn’t needed to run home and let the dogs out, I would have lingered to listen for hours more. Forget the 3-minute track approach to power blogging; the Estelon Extreme is the real deal. Through it, listening is an unmitigated pleasure, and unfailingly enlightening.