The original Eclipse is a long time Avalon favourite and one of the first Avalon designs by Charles Hansen, who started the company with a partner

Those who know me, know that I haven’t had much luck with dynamic speakers and am all the more happy with magnetostatics like Magnepan and Apogee. I don’t think there will come a time where I’ll prefer dynamic speakers over magnetostatics but if ever a dynamic speaker is capable of nearing magnetostatic qualities, Avalon springs to mind. Or at least, that’s what is always said. I was not having doubts about my own speakers (I am using both Magnepan MG3.6Rs and revised Apogee Duetta Signatures at this stage) but when my friend Jan Cramer called me up asking if I was interested in giving these speakers a listen, naturally I took the offer. 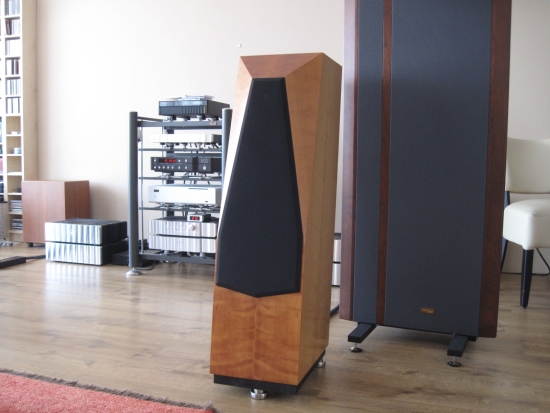 Any loudspeaker is highly interactive with its environment, the room that it is placed in. In all but the most perfect rooms, you are listening to a mixture of direct speaker sound and your room, reacting to the speakers. My room is far from perfect and even though I have heard a large amount of speakers in it, my experiences need not be typical of results obtained in other rooms. At the very least though, the results as mentioned as part of comparisons with other speakers, should provide something of a starting point. Ultimately though there is just no substitute for listening to speakers in your own setup.

These speakers are from 1991 and they are one of the first designs by Charles Hansen who set the principles for all Avalon designs to follow. Yes, that’s the same Charles Hansen that currently runs Ayre. By then Neil Patel had stepped in and is currently still running the company. Actually Neil did help Charles somewhat with the design of the Eclipse, but only in the form of selecting wires and setting tweeter levels. The Eclipse has now been re-introduced and is now named Eclipse Classic. I understand that it was not universally regarded as an upgrade over the original model but as I haven’t compared them myself, I really cannot comment on that. The model under review here is the original model.

Interestingly, as supplied, the tweeters have wire-mesh cages over them, held on by the driver’s magnetic field, and once the Eclipses have been optimally positioned, Avalon recommends carefully removing these grilles. These cages however weren’t included with this pair and judging from the absence of these cages on any pictures on the internet, I fear that most most people won’t know about this, possibly unknowingly buying a second hand pair without them. 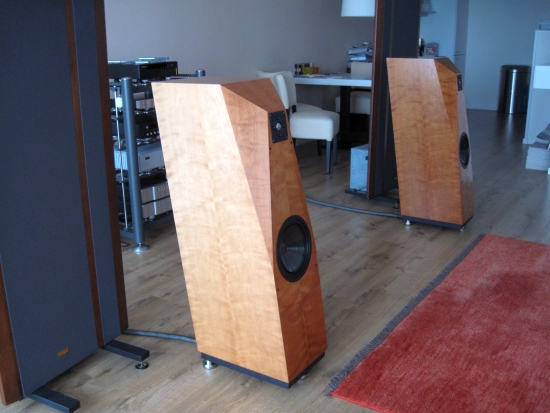 Upon first connection (this pair is old and well-run in) to my Jeff Rowland model sixes, the Eclipses produce a sound that is contrary to predictions. For example, because of their massive construction and dead cabinet you would expect them to sound utterly uncoloured. Well, not true. Second misconception was about the bass. I for one always thought that Avalons sound bass-light. Combine that with the uneven bass-characteristics of my room and I would definitely expect them to be light in bass. Not true. Third I was expecting fabulous resolution. Well, not really.

What followed was an evening or two of moving the speakers around the room. Best sound was achieved by having them quite far from the rear wall and with no toe in.

Yes, just like I heard with the Avalon Monitors, the Eclipses have quite a bit of colouration. One might not hear that when used to listening to cabinet speakers but when coming from Apogees and Magnepans, this is something quite obvious. A review in Stereophile reads: “it must be said that the $2000/pair Apogee Stages offer a less colored, more musically believable midrange presentation.” What’s more: the Avalons I’ve heard tend to have a lot more colouration than many other cabinet speakers. But the colouration is of the sympathetic kind and not at all difficult to get used to, much like the added distortion with some tube amps. I’m not implying that the Eclipses actually distort – they don’t, but they’re definitely not very transparent. 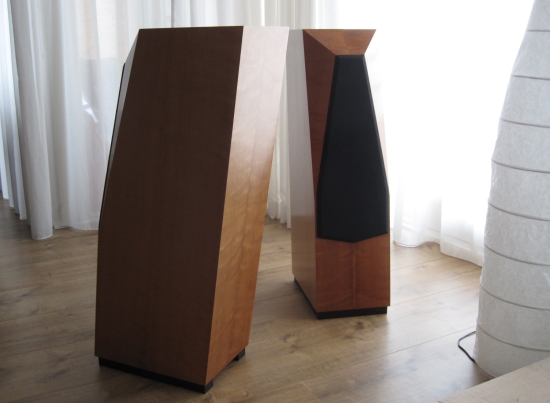 The Eclipses have remarkably nimble bass, easily among the best bass heard in this listening room so far. It is at once fast, nible and articulate while also going remarkably deep and avoiding to trigger my room modes like many other dynamic speakers do. It might have to do with the Eclipse being a closed design, or with its high Q. I don’t know. Fact of the matter is that they have splendid bass that can range from precise and dry to full, round and fat, just as the recording requires.

Resolving power is not particularly high. It’s not like they mask fine detail but they’re also not better than the B&W N804’s. At their price I would have expected more. But just as with their colouration, their mediocre resolving power is something that one quickly acclimatises to and is not bothered about for long.

Even though it is said in Sterophile that the MB Quart tweeter is on the bright side, I experience quite the opposite. I find the treble to be dull to the point of sounding very dark. With some CD’s the treble is just about enough but with many CD’s the Eclipses clearly lack airy and extension. I have to admit that treble air is very much a Christiaan thing and that I rarely read about this aspect elsewhere but several of my friends confirmed to hearing the same thing. However, when focusing on individual, real instruments and voices, there is never a sense of congestion or lack of bite in the treble. It is only this overall sense of a lack of air, that I am used to hearing in magnetostatic designs, but also in the aforementioned B&W’s.

In the midrange I continuously hear a strange phasey colouration. I can’t be sure what it is exactly that I am hearing but I’ve heard it before, with the smaller Avalon Monitors, but also with the Dali Helicons. I think it is crossover filter-related, almost like the crossover was designed to optimise one area at the expense of another. This is why I would be very interested in hearing the Eclipse’s bigger brothers: the Ascent.

In spite of the above quibbles, still, these Avalons do something very well: they make music in a way that forges you to forget about technicalities and to start listening to the music itself. After I grew accustomed to the colouration and the darkness in the treble, I noticed how I was just listening to the music, without worrying about “the negatives”. Other friends have visited and even though they had the same initial responses as I did, all of them, too, admitted to growing fond of them after a few music tracks.

But they do of course have some very strong points, one being their focus and soundstage layering and -width. The Eclipses are different from Magnepans. The latter always seem to have a large soundstage and I like that about them. Apogees are more true to the source, portraying a large or small soundstage just as the record requires it. The Avalon Eclipse is just like that. It can range from almost boringly smallscale to room-filling depending on the music playing. The Eclipses’ soundstaging really is something you have to hear for yourself. At first it seems that the speakers don’t go much beyond their cabinets in terms of staging. But then, all of a sudden, or every now and then, you’ll hear spacial sounds all over the room, while the center image stays rock-solid. In addition to the room-wide placement of individual sounds, the Eclipses also excel in throwing a huge ambience, like I have only heard Apogees or Magnepans do previously. 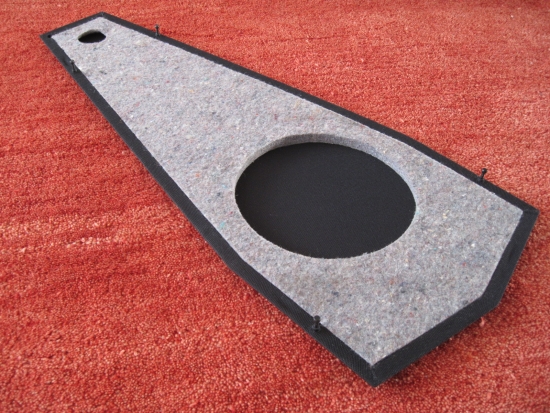 Above: The Eclipses come with grilles that are said to be optimised for permanent use. The speakers are supposed to sound less good without them. I have to disagree, finding them too dark and too dull with the grilles on. Removing them made for a much more open sound with an overall apparent increase in resolution and treble air. One does need to be careful not to bump into the tweeter however, as these MB Quart units are no longer available. 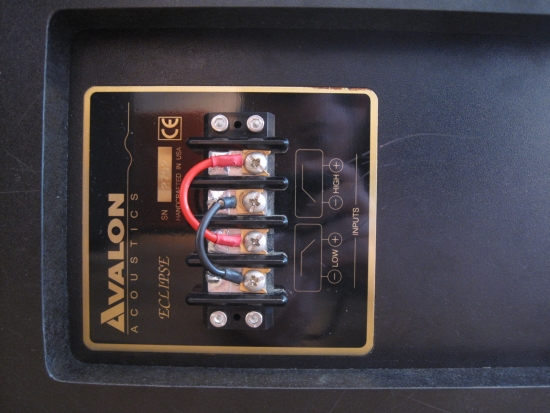 Above: Connection of the speaker cables is on the bottom of the very heavy cabinets. This makes for a tidy look but is in practice very unhandy and while some spades do fit, one cannot use angled ones as they will hit the floor if not using the separate (unattached) spikes.

The Eclipses are unassuming loudspeakers. They don’t impress at first but do quickly grow on you. In spite of their colouration, weird, phasey tonality in the midrange and lack of treble air, they are hugely adaptive to the music. They can sound dry, thin and small if the music is recorded that way, but they can also sound huge, with room-filling ambiance and a soundstage layering that I have only heard Martin Logans produce before, entirely captivating the listener and making him or her forget all about the technicalities. The Eclipses are highly musical and can play any kind of music well, even hard-pounding house music and I bet that they’d make a fair stab at playing rock, too. They are however quite revealing: play a badly recorded album and it will sound as such. The super-articulate bass is partially responsible for that, for example making R&B bass sound like the clipped square waves that they are, instead of nicely rounding them off. It seems that they do require some power and also don’t play very dynamically on low level – it was consistently clear that they were happier and more convincing when playing a little louder than I am used to. Pairing them with more powerful amplifiers than the (150 watt, 35 ampere) Rowland model sixes might be the answer but I can’t be sure. These Eclipses do make me curious as to how their larger three-way brothers sound. The Ascent springs to mind, but it has the same tweeter I believe, so I’d actually be more curious about having a listen to some more modern Avalons. Will they convert me from my magnetostatic addiction? Probably not, but I’d wager that they might come closer than most.

Finally, a disclaimer: room acoustics are a bitch. They really are. They can make a fantastic speaker sound mediocre. I know that my room isn’t perfect: especially dynamic speakers tend to work less well. But because the Eclipses did seem to be synergetic with my room, I think that my report is pretty accurate. However, I cannot be sure that their treble really is dull until I have heard the same pair in another setup. Luckily, this pair was sold to Eddy, another friend of mine, whose updated setup I hope to review some time. Once I have, I will of course report back.